The Way I See It – Dr. Temple Grandin 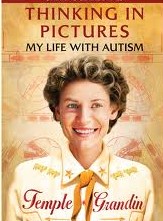 Dr. Temple Grandin is a world-renowned professor. She is known for her expertise of animal behaviors and her studies of cattle and the implementation of strategies to improve handling of cows. As a child, Grandin was also diagnosed with Autism. But, Grandin did not allow this to hinder her, instead in a TED talk (definitely worth watching!) she explains that her ability to think in pictures and see details that the “typical mind” does not see, enabled her to become the expert that she is and was a huge asset in her career. In addition, during her time examining the behaviors of animals and determining how to help them, Grandin identified the benefits of proprioceptive (deep pressure) input and how to improve her own quality of life.

In a lecture, Dr. Grandin explains what it is like to live with sensory processing dysfunction. She compares each section of the brain to departments in a busy office. Messages (regarding sensory information) are sent through the brain via the white matter. Imagine that the white matter is like e-mail, text message, phone call or IM. In an effectively designed brain, the messages all get to the proper places with proper timing, creating an organized calm environment in the brain/office. If the white matter does not efficiently transfer messages to the proper locations the brain is left disorganized and messages are interpreted inappropriately, incorrectly, or not interpreted at all.

Sensory processing dysfunction is very common within the Autism community.  Individuals diagnosed with autism do not effectively filter and interpret messages efficiently. They are often sensitive to noises, as the sounds they hear are interpreted as much louder than they are. The thought of a fire drill can easily instigate a panic attack. Light and touch are also senses that are often interpreted incorrectly; walking into a room with fluorescent lighting can put people with autism into a high state of arousal making focusing or attending to tasks difficult. The lightest unexpected touch or the feeling of a tag from a shirt on their skin can cause a meltdown. Living with constant threats like these, often causes these children to retreat into their own world and shut out the world around them. Thus, children diagnosed with autism are often hard to engage as they show little interaction with the real world. They are in our world, but “live” in their own!

During Grandin’s time on the farm, she spent hours watching cows being “squeezed” in squeeze chutes used to stabilize cattle during immunization. She observed the cows’ calm reactions and eventually tried it out herself, squeezing into the contraption meant for the cows. She found that deep pressure (proprioception) in the form of “squeezing” effectively calmed her system down for hours. After recognizing the positive affects the contraption had on her she constructed a “squeeze machine” of her own. This she felt enabled her to live calmly, thus enabling her to interpret input correctly. Since her invention of the squeeze machine and the documentation of the positive results of deep pressure, this strategy is being used worldwide and has proven to be an effective method to calm individuals with sensory processing difficulties.

It is important to understand what people with autism may be feeling and the way they interpret the world so that we can help and guide them to reach their full potential. Dr. Temple Grandin did not allow for her diagnosis of autism get in her way – instead she used that as fuel – enabling her to make the tremendous discovery and impact that she did. And, she explains that it is important for people to encourage and help develop the minds of children with autism in ways that jive with the way the autistic mind thinks and interprets information. As a therapist, this is something that I find inspiring and motivating. It is my goal to help others, and especially children, with autism to recognize their potential and help them achieve the independence that they need to reach their full potential, just as Dr. Grandin did.

About the Author: The Therapy Spot
The Therapy Spot of Baltimore is a multi-disciplinary pediatric therapy center, featuring an energetic group of experienced and qualified therapists. We provide speech therapy, physical therapy, and occupational therapy to children in the greater Baltimore region.
Recent Posts